Feral pigeons can be public health pests. They can accumulate wherever there is food and shelter, and can take up residence almost anywhere, including around houses, tall city buildings or schools. As well as being a nuisance and causing extensive damage to property, feral pigeons can also pose a risk to human health.

That statement from the South Australian Health Department would seem to suggest that the SA Government considers that pigeons are a pest that requires control, yet in another installment from the state that keeps on giving, pigeons enjoy more legal protection in South Australia than just about anywhere.

The important caveat on that statement is that the specific protections only apply to a specific type of pigeon, being the homing pigeon.

Sure, there are easier ways to break the law – pigeons are probably quite difficult to interfere with – and when you factor in the costs of a defending a charge, it is probably worth directing your efforts elsewhere. Just don’t let any prospective employers or potential romantic partners learn of your misdeeds. They’re probably not going to be OK with it. Ask me how I know…go on…ask me!

The law doesn’t just single out killing homing pigeons as a specific offence. Homing pigeons are also protected from being assaulted or kidnapped.

(a)         without lawful authority, kills, injures or takes any homing pigeon; or

(b)         enters upon any land for the purpose of killing, injuring or taking any homing pigeon without lawful authority,

is guilty of an offence.

Section 47 of the Summary Offences Act 1953 (SA) singles out the fixating fowls as a sub-category of animals deserving of protection beyond the already broad (and much harsher) provision of section 13 of the Animal Welfare Act 1985 (SA) which allows for up to 2 years imprisonment and a $50,000 fine.

The specific crime of killing, injuring or taking a homing pigeon is punishable by a fine of only $250, which pales in comparison to the 2 years imprisonment facing anyone harming any other animal.

The law itself is straight-forward but there are a number of further intrigues that make this law somewhat more unique; specifically:

As with many of these bizarre provisions under the Summary Offences Act (Exhibit A, Exhibit B), it is proving impossible to trace the underlying reason behind these exceptions or to find any actual cases where this provision has been tested; which only further confounds the reasoning behind the actual reason for the law.

To stay on the right side of this law next time you are in Adelaide, I would advise that it is perhaps best to restrain from harming any pigeons just in case your target turns out to be a highly trained homing pigeon…unless you’re a farmer, in which case, its game on. 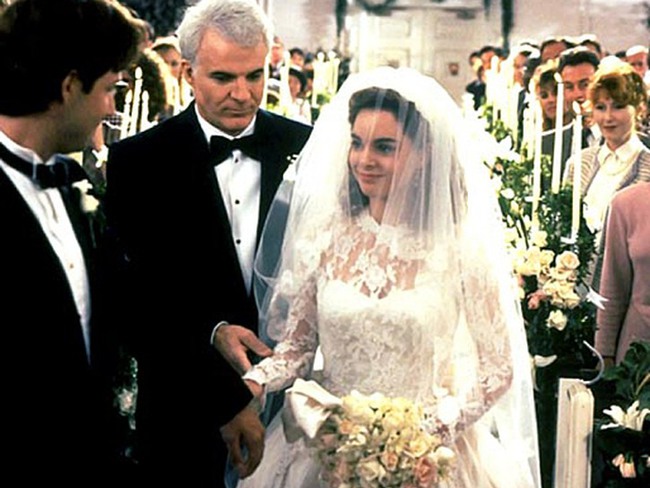 It’s not the greatest secret in the legal world that many jurisdictions are slow to repeal outdated legislation. Likely owing to the fact that the world is only 6000 years old, most of these crazy old laws are based on religion.

It is illegal to disrupt a wedding or any other religious ceremony in South Australia.

The Summary Offences Act was enacted in 1953 and is patient zero for dopey South Australian laws.

Under s7A of the Act, it is illegal to disrupt a religious ceremony including weddings or funerals. The section creates an offence for disrupting a ceremony regardless of the person’s intent.

S7A(1)(a) creates an offence for disrupting a religious ceremony, whilst s7A(1)(b) creates an offence for disrupting a ceremony in a way that is designed to be offensive. This would suggest that an offence under s7A(1)(a) is intended to cover all behavior that in any way disrupts a wedding. The creation of an absolute liability offence is recognised as generally requiring explicit language from the legislature due to the serious implications, but nonetheless, the language remains open to find this.

This is potentially why the South Australian rom-com movie industry has never taken off.

The craziest part is that I haven’t gotten to the crazy part yet. The Act may have been created in 1953 when all those Australian beaus were returning from the end of the Korean war, but section 7A was only added in 1992.

In 1992 Cartoon Network was created, Bill “eating ain’t cheating” Clinton was sworn in as President and South Australia outlawed disrupting weddings. There is no doubt in my mind that the three are closely connected.

During the Christmas shopping season in 1997, Daniel Pfeifer wore a Dead Kennedys’ t-shirt with the logo “too drunk to fuck” whilst walking around the Adelaide shopping centres. 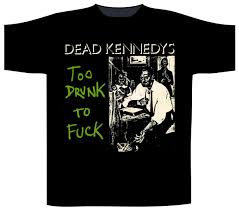 Mr Pfeifer was charged under another section of the Act relating to general offence caused in public places, but the Court considered it similar to s7A and discussed that a mental element must be read into the act by implication.

The question remains unsettled, which is unfortunate for our purposes, but probably fortunate for South Australians. I could not find any instance of definitive judicial instruction on just how extreme the section could be applied. I guess the SA constabulary really needs to become a whole bunch more prescriptive before we get some good guidance.

Apologies already for the misleading title, but “South Australia Has Limits on the Size of Your Fridge” is nowhere near as sexy.

The law itself is easy enough to explain but the purpose behind it is somewhat more intriguing and required a lot more research than you would expect…so you’re welcome.

Disclaimer: All puns are the pundits own and Commercial Lore takes no responsibility for the puns, both terrible and amazing, contained herein.

The South Australian law was enacted in 1961 in response to an apparent spate of deaths following people becoming trapped in fridges that could only open from the outside.

Under s58b of the Summary Offences Act 1953 (SA), it is illegal to sell or hire a fridge over 42.5 litres that cannot be opened easily from the inside. Or as the law originally stated any fridge over “one and one half cubic feet”…simpler times. Make South Australia Great Again.

A grandfather clause was also introduced providing an exception for any fridge that was purchased or imported to South Australia prior to 1962. The penalty for a person found with a husky esky is $750 of cold hard cash.

In addition to being illegal to sell or hire one, it is also illegal to dispose of one either through dumping (already illegal) or even placing one on a “dump, tip or sanitary depot”. 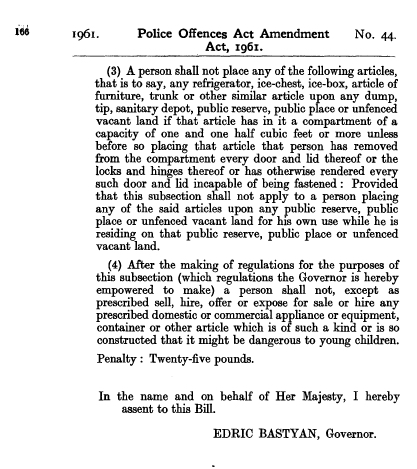 It’s proven impossible to find any convictions under this section but one could presume that at some stage a policeman broke out a measuring tape and asked whether their refrigerator was running.

Large Fridges Used to be Cool

This does not just appear to be a silly law, but rather an interesting time-capsule. It makes sense that fridges should be able to open from the inside to prevent unfortunate events. But compared to other states, it is interesting to consider whether South Australia’s fridge death problem was so great that they had to uniquely regulate the types of fridges people could sell. This law is probably past its use-by-date but it’s not hurting anyone, so you know, who cares.